Pablo Larrazábal produced a remarkable comeback to win his fifth European Tour title after a dramatic finale at the Alfred Dunhill Championship in South Africa.

The Spaniard started the day three shots clear of the field, but struggled with blisters and swing problems throughout the final round at Leopard Creek, carding six bogeys and a double bogey to fall three shots behind at one stage. 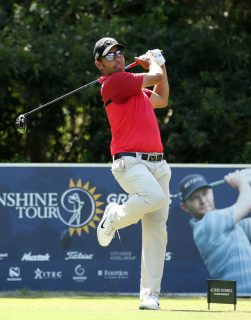 However, the 36 year old regrouped to make three birdies in his last four holes to seal victory with a 75 and an eight-under-par total. That was one better than Sweden’s Joel Sjöholm, who completed a remarkable weekend effort with a 69.

“I woke up this morning and I didn’t think I was going to play,” said Larrazábal. “I couldn’t put my shoe on, I couldn’t walk to the buggy. I really struggled on the back nine, I have a big blister on my right toe and I said to myself ‘If Tiger can win a US Open with a broken leg…’ and I just fought hard.”

Larrazábal, who had gone four years without a European Tour victory, added: “It’s been a long road the last few years, and this is where I want to be. This is a place that I really love and I will come back until I cannot play anymore. Being a winner again means so much.”

Dutchman Wil Besseling held at least a share of the lead for most of the final round, but bogeyed the last after his second shot finished on rocks behind the green, and a 74 left him tied for third with South Africans Branden Grace and Charl Schwartzel, with the latter enjoying a solid result following a long injury lay-off. Fellow countryman Zander Lombard looked set for a top-five finish until a costly triple-bogey at the last saw him slip into a tie for seventh.

‘Looking at Andy Ruiz, we’re looking at ourselves - and seeing that anything is possible’

Jonathan Vilma jumps to Fox Sports in another ESPN loss

Panel: What made Joe Calzaghe such a special fighter?

Jonathan Vilma jumps to Fox Sports in another ESPN loss